The Puppy & the Parrot: Our story of hardship living in Cambodia

Sanni is my best friend and my equal, if not also my opposite, in every way, but for a long time there was one exclusion. Up until November last year he did not have a valid Cambodian visa, which meant he wasn’t signed to a club there and was not able to make any money to support himself or provide for me. 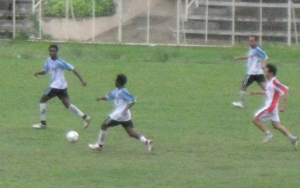 When I met Sanni on February 5th last year he was a broken man. I spent the last year putting him back together any way I could. I love him and I have faith in his football playing ability so for me it was a choice, not an easy one when weighed against its responsibilities but always a choice I made to keep going.

Over this time I have exhausted my resources, physically, mentally and emotionally, to the point where I became mentally unstable and physically ill. It wasn’t taking care of him that was too much though- this he made easy because he was proactive and supported me in many other ways. It had a lot to do with never having enough money, the racism and profound corruption we experienced from Cambodians, and the three cultures of Western, African and Cambodian that I was tug-o-war’d between.

The problem that Sanni had was not one of his own doing but that of dodgy, thieving, so-called football managers who will stop at nothing to get more money out of players, who sadly are too naive and too desperate for professional development outside of Africa to know how to see scammers for what they are.

African’s who come to South East Asia are given all kinds of stories about the possibilities for success. The prospects of signing to teams isn’t as lucrative as it’s made out to be, in fact it isn’t lucrative at all, and the managers involved are often more interested in scamming players then helping them. Managers will scam thousands of dollars from unsuspecting players to get them out of their country only to dump them as soon as they’re on the plane.

Players arrive to their destinations with whatever life savings, hopes and dreams they and their families have packaged for them and discover they’ve been shafted. If they call home they need to admit to the failure and the scam, if they don’t they’ll starve and find themselves homeless in a strange new country.

The African community here in Cambodia is a tight-knit friendship but the undercurrent of shame that is carried by so many of the strong, proud men runs deep. Many would be extremely surprised to learn that Sanni wasn’t legal and it is a mark of the strength of his character that he’s allowing me to write this at all. That said, there’s good reason why he calls me Parrot; his story, our story, is one that needs to be told, even if he thinks I talk/ write too much!

Sanni’s story is not dissimilar to many of our friends who remain trapped in Cambodia. Sanni was playing for a club in Vietnam when he was invited by a manager to trial for clubs in Thailand, a country that is more lucrative for football. Sanni trialled for a division one team and got selected but sadly the manager wasn’t as happy with the arrangement as Sanni was. By now Sanni’s Thai visa was counting down expiry days very quickly and communication between the club, the manager and Sanni had become estranged.

When Sanni contacted the club directly he learned that he’d been dropped because the manager was insisting on more and more money. Devastated and desperately broke he had two days to cross the border for fear of overstaying in Thailand. The closest border

was to Cambodia. Upon arrival he made a few contacts with Cambodian club managers. Over time he trialled and got selected for one club and began to play again.

As it was explained to me by his friends, the next few months Sanni played well, achieving a good reputation as a respectful player who was fast and creative. The club took care of him, not to international standards but I’m told he didn’t go without. He had given the club his passport for them to process the business visa as is standard practice but months later when the football federation made the decision to fire all the African players Sanni received another blow that nearly ended him. They hadn’t processed the visa and he had inadvertently overstayed for more than three months.

Financially, this was dire. At five dollars a day for the first month and six every day thereafter Sanni was faced with an exorbitant fine, one he couldn’t pay. He lived in a rented apartment with five other equally desperate guys scrounging for a few dollars to eat or pay bills while continuing to train every day. This stress began to show in late December of 2009 and he got injured. Too broke to buy medicine and in too much pain to physically do anything to help his condition, depression set in. He refused to leave the house.

Worried about him, his friend Michael, decided that he needed to go out, just to be among people. Despite not wanting to Sanni went to the club and just as his friend predicted he began to relax, to momentarily forget his problems. This was the night that was to change his fate forever because it’s when he saw me for the first time.

From the time we met until the time I left him in Cambodia on December 19th last year it has been a long, hard, financially insecure and emotional road of trying to save and build the funds to go under various immigration tables to fix his visa problem. We did it and I can proudly say he is now safe and trialling for clubs in Thailand!

Already I can predict your comments about Sanni’s predicament and then his involvement with me. It’s undeniable to believe that the only reason he was with me was to fix his visa. It’s impossible for you to understand that your knee-jerk reaction isn’t founded on anything other than the stereotypes of bi-racial relationships. There’s a stereotype for a reason and I have always been aware of it. It is not what our relationship is founded on.

About three months into our relationship we were living with each other when something inside me snapped. I threw him out on the bare bones of his arse and it took three weeks for us to fix it. I thought the same way you do, that is, that he was just using me and he didn’t really love me. He hadn’t realised he’d become complacent in allowing me to budget the money simply because I earned it.

He’d become a puppy following my lead and allowing me to make all the decisions. A pressure I couldn’t maintain. He loved me but wasn’t aware of how he could help me because in his mind he wasn’t the man, he wasn’t the provider. Despite all that I was learning about his African culture, this was a turning point for us. I hadn’t known to the true extent how demoralizing it was for him to not provide for me.

It’s not a part of my Australian culture to worry about who is the financial provider in the family, commonly it’s both the man and the woman who provide income and the management is then decided on an individual relationship level. I grew up in a low-middle income household where my mother worked as a nurse and my father was the house husband making his own income independently as a carpenter. Dad was always home and it was Dad that managed the money, but Mum made the majority of it. This is why it had not occurred to me that Sanni grew up in a culture where the man provided for his family and the woman provided the home life.

Puppy had to man up and look for other ways to provide for me. I stopped carrying cash when we went out together. I stopped going to the market because (despite the stench making me want to puke) it became his way of supporting me. During the week while I worked he would make us lunch. And we did the budget and made the tough decisions together.

Today, I’m back on Australian soil after 3.5 years away to start the work on building ourselves a better future.  This may not necessarily be here but we needed to start where it was easiest. We didn’t do what a lot of bi-racial relationships see as their only alternative to staying together; we haven’t married for the sake of immigration convenience. And we’re not going to. When I marry Sanni it’ll be because we’ve worked hard to earn it and only after he’s been here and after I’ve been to Nigeria. Only when we’ve spent time in each others cultures can we truly appreciate why we’ll spend the rest of our lives together.

10 thoughts on “The Puppy & the Parrot: Our story of hardship living in Cambodia”